See the little dude in the photo, over there? That’s my Cyclone Kid. The reason I work so hard. The little man who makes me laugh, without saying a word. He is my handsome, fuzzy-headed companion. That’s my kid, and as I’ve mentioned before, he also has Autism Spectrum Disorder.

I adore him, but he can be a lot of work. One of the things that took a long time for me to come to terms with is that I can’t do everything. That was a harsh realization for me. I’ve always prided myself on not asking for people’s help, and not being a bother to anyone. And frankly, not risking the disappointment of putting yourself out there and not getting back the response that you desired.

It is not something that I admit easily, but it is something that I should have admitted sooner; before I developed the permanent, exhaustion-fueled bags under my eyes. Kids are a lot of work. Kids with Autism, increasingly so, and no, you don’t have the time or energy to be great at everything.

This leads me to my latest Cyclone Kid story.  If you can’t tell from the photo, Cyclone Kid is quite the bundle. At 5 years-old he’s already more than half my height and weight, and as strong as a baby bear. But, he doesn’t know that, which is okay. At this point, he’s still an adorable baby bear.

The other day while we were playing, he gave me one of his baby bear style hugs and knocked us both off balance. In typical Mama Bear fashion, I elected not to fall on him and instead reached out to brace myself against the nearest wall.  As it turns out, drywall is no match for Cyclone Kid and me. My hand went right through, creating this lovely hand-sized hole in our wall.

That was awesome.  I took a deep breath and then laughed for 10 minutes. (I’m a comic. If we don’t laugh at weird stuff like this, we’d burst into tears.) Then reality set in, that chuckles do not repair drywall.

Here’s where the “helping hand” comes in. I considered trying to fix the hole myself, but instead, I mentioned the fiasco to my good buddy, Derick. Of course, he laughed at me too, but after only two compulsory, “Sure I can help you with your hole,” jokes, he patched things right up. Totally worth it! 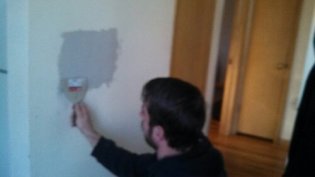 My “Knight in Plastered-Armor” took about 15 minutes to do what would have taken me all day, or even worse turned into an “I Love Lucy” style disaster.

(Don’t get me wrong. If I ever get a sitcom, that’s totally what’s going to happen in the episode. We’ll call it “Plaster-geddon.)

Many families with children on the Autism Spectrum talk about how they wish that they had asked for help sooner. I am no exception. So thank you to all the good friends that have stepped up to help this occasional “lady in distress.” Cyclone Kid and I appreciate you all very much.